Edie Falco is an American actress who has performed on stage, film, and television. She is best known for her portrayal of Diane Whittlesey on HBO’s Oz, and for her role as Carmela Soprano on HBO’s The Sopranos. She also portrayed the title character in the Showtime series Nurse Jackie. Born Edith Falco on July 5, 1963 in New York, New York, to parents Judith Anderson and Frank Falco, she is of Italian descent on her father’s side, and of Swedish, English, and Cornish descent on her mother’s side. She has two brothers named Paul and Joseph, and a sister named Ruth. In 1981, Falco graduated from Northport High School and attended the acting program at State University of New York at Purchase, and graduated in 1986 with a Bachelor of Fine Arts in acting. She adopted two children named Macy and Anderson. 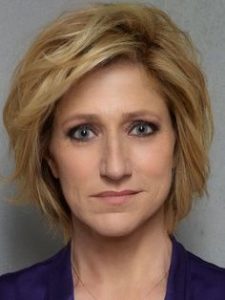 Edie Falco Facts:
*She was born on July 5, 1963 in New York, New York, USA.
*Her parents are Judith Anderson and Frank Falco.
*Her uncle is novelist, playwright, and poet Edward Falco.
*She graduated from the acting program at the State University of New York at Purchase.
*She is a vegan and supports People for the Ethical Treatment of Animals (PETA).
*She dated Stanley Tucci from April 2003 to March 2004.
*In February 2004, she was diagnosed with breast cancer and recovered the same year.
*She has a dog, Marley.
*She is a Buddhist.