Elena Santarelli is an Italian fashion model, actress and television personality who won the Elite Model Look competition in 1999. She has appeared on the cover of fashion magazines such as Marie Claire, and Harper’s Bazaar. She hosted the sport program Stadio Sprint, and participated to the third edition of the Rai 2 reality show L’Isola dei Famosi in 2005. She also hosted several programs, such as Total Request Live on MTV and Kalispéra on Canale 5. As an actress, she is active in films, TV-series and on stage. Born on August 18, 1981 in Latina, Lazio, Italy, to Patrizia and Enrico Santarelli, she began her career as a model, and she made her television debut as an assistant of Amadeus in the Rai 1 quiz show L’eredità. She married footballer Bernardo Corradi on June 2, 2014. Together they have two children: a son named Giacomo and a daughter named Greta. 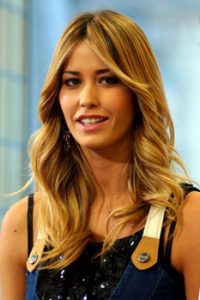 Elena Santarelli Facts:
*She was born on August 18, 1981 in Latina, Lazio, Italy.
*She is the niece of retired Italian professional football player Ubaldo Righetti.
*She won the Elite Model Look in 1999.
*She has been featured on the cover of a number of publications including Maxim Italy Magazine.
*She has walked runways for Emporio Armani and Laura Biagiotti.
*Her hobbies include: dancing and listening to music.
*Follow her on Instagram.