Elizabeth Olsen is an American actress, born February 16, 1989, in Sherman Oaks, California, to David Olsen, a mortgage banker, and Jarnie Olsen, a manager. She is the younger sister of twins Mary-Kate and Ashley Olsen. Her father is of Norwegian descent and her mother is English. She is best known for her roles in the films Godzilla, Silent House, Liberal Arts, and the critically acclaimed Martha Marcy May Marlene, for which she was nominated for numerous awards. 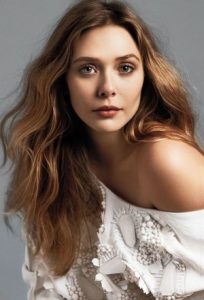 Relationships / Affairs / Boyfriend:
She was in a relationship with actor Boyd Holbrook from 2012 to 2015.
She has been rumored to be involved with her ‘I Saw the Light’ co-star Tom Hiddleston for quite some time.

Elizabeth Olsen Education:
She completed her schooling from Campbell Hall School in North Hollywood, California. (2007)
She studied acting at New York University’s Tisch School of the Arts and the Atlantic Theater Company.

Elizabeth Olsen Facts:
*She is the younger sister of Mary-Kate Olsen and Ashley Olsen.
*She belongs to Norwegian and English descent.
*She was nominated for 3 awards for the 2011 movie Martha Marcy May Marlene.
*She commenced her acting career at the age of 4.
*She likes to play volleyball.