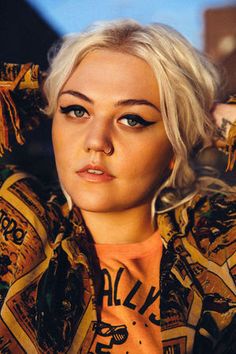 Born Tanner Elle Schneider on July 3, 1989 in Los Angeles, California, to parents actor and comedian Rob Schneider and former model London King, her parents divorced when she was young and her mom remarried a man named Justin Tesa, and she grew up in southern Ohio. She has a sister Miranda and brother Noah. King graduated from Elisabeth Irwin High School and studied painting and film at the University of the Arts in Philadelphia. She was married to Andrew Ferguson in 2016 to 2017.

Elle King Facts:
*She was born on July 3, 1989 in Los Angeles, California, USA.
*She is the granddaughter of Pilar Schneider and Marvin Schneider, and niece of April Schneider and John Schneider.
*She started playing guitar at the age of 13.
*Her musical style is country, rock and soul.
*She released her debut EP, The Elle King EP, in 2012.
*She released her debut album, Love Stuff in February 2015 via RCA Records. The album produced the top 10 song “Ex’s & Oh’s”.
*Aretha Franklin and Al Green are among her musical inspirations.
*Visit her official website: www.elleking.com
*Follow her on Twitter, YouTube, Facebook and Instagram.