Brazilian model Emanuela de Paula was born on April 25, 1989 in Cabo de Santo Agostinho, Pernambuco, Brazil, the daughter of Josefa Nascimento and Ely José de Paula. She has been the face of UK retailer Next for the past two seasons and can be seen in the 2009 Pirelli Calendar. She has a perfect body which measures breast 33, waist 23.5 and hip 34. She has a height of 5 feet and 9½ inches which is around 177 cm. 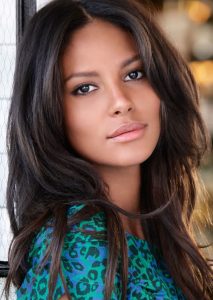 Emanuela de Paula Facts:
*She was seen in the 2009 Pirelli Calendar.
*She signed with Marilyn Agency in 2005.
*Her father is Afro Brazilian and her mother is White Brazilian.
*Forbes ranked her as the eleventh highest paid model of the year (2009).
*She was featured in a supermarket advertisement at the age of nine.
*Follow her on Twitter, Facebook and Instagram.