Canadian actress Emily Vancamp is known for her starring roles in television, such as Everwood, Brothers & Sisters, and Revenge, and in the films Norman, Beyond the Blackboard, The Girl in the Book, Boundaries, and Captain America: The Winter Soldier and its sequel Captain America: Civil War. She was born Emily Irene VanCamp on May 12, 1986 in Port Perry, Ontario, Canada. She is the daughter of Cindy and Robert VanCamp, and sister to Katie, Molly and Alison. In May 2017, she became engaged to her longtime boyfriend Josh Bowman. 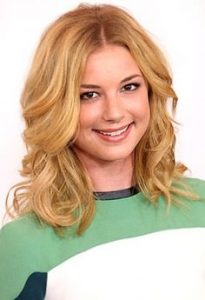 Emily Vancamp Facts:
*She was only 3 when she started studying dance.
*She moved to Montreal to train in ballet at age 12.
*She is also a ballet dancer.
*She is a big fan of ice hockey. She supports Montreal Canadiens team.
*She is fluent in English, Québécois French, and Spanish.
*Follow her on Twitter and Instagram.