Eric Holder is an American attorney who served as the the 82nd Attorney General of the United States, from 2009 to 2015. Serving under President Barack Obama, he was the first African American to hold the position of U.S. Attorney General. He previously served as a judge of the Superior Court of the District of Columbia and as United States Attorney for the District of Columbia. Born in The Bronx, New York City, New York, on January 21, 1951, to Eric and Miriam Holder, Eric Himpton Holder Jr. grew up in the predominantly black neighborhood of East Elmhurst, Queens and attended public school until the age of ten. His father was a real estate broker and his mother was a telephone operator. He has one younger brother, William Holder. He has been married to Dr. Sharon Malone since 1990. They have three children; Brooke, Maya and Eric. 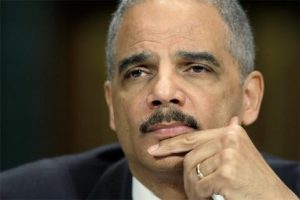 Eric Holder Facts:
*He is the eldest of two brothers.
*He played freshman basketball while in Columbia University.
*He became the first African American to hold the position of U.S. Attorney General.
*Time Magazine named him as one of the 100 Most Influential People in the World in April 2014.
*Follow him on Twitter.