John Hurt was an English actor, best remembered by the public for his roles in The Elephant Man, Midnight Express, Last Tape, Nineteen Eighty-Four, A Man for All Seasons and The Naked Servant. He is also known for his voiceover work in the animated version of The Lord of The Rings. His screen and stage career spanned more than five decades, and considered one of the Britain’s finest actors. Born John Vincent Hurt in Shirebrook, Derbyshire, England, on January 22, 1940, he was the youngest of three children of Arnold Herbert Hurt and Phyllis Massey. He was married four times. He had two sons with Jo Dalton: Nicolas Hurt and Alexander Hurt. He died of pancreatic cancer on January 25, 2017, at the age of 77. 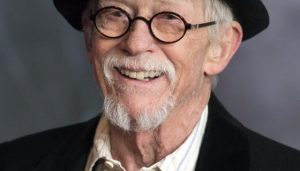 John Hurt Facts:
*He was the youngest of three children of his parents.
*He spent much of his growing years in solitude.
*He made his film and stage debuts in 1962.
*After his fourth marriage in 2005, he gave up smoking and drinking.
*His older brother, Anselm Hurt, became a monk and a writer at Glenstal Abbey.