Erykah Badu is an American R&B singer and songwriter. She is best known for the hit songs “On & On,” “Honey,” “Tyrone,” and “The Healer.” She has released five studio albums. Her first album, Baduizm, was released on February 11, 1997 and was certified triple Platinum by the RIAA. Her first live album, Live, was released on November 18, 1997. The album was certified double Platinum by the RIAA. Born Erica Abi Wright on February 26, 1971 in Dallas, Texas, to Kolleen Maria Gipson and William Wright Jr., she has a younger brother and sister. She started theatre studies at Grambling State University, but left to devote all of her time to music. She 3 children: a son Seven Sirius Benjamin with her ex-boyfriend André Benjamin, a daughter Puma Sabti Curry with her ex-boyfriend The D.O.C. and another daughter Mars Merkaba Thedford with her boyfriend Jay Electronica. 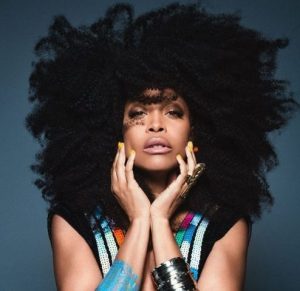 Erykah Badu Facts:
*She was born and raised in Dallas, Texas
*She is a vegetarian.
*She was listed #100 on VH1’s 100 Greatest Women of Rock N Roll
*People Magazine named her one of the top 50 Most Beautiful People in the World in 1998.
*She was once engaged to rapper Common.
*She is close friends with ‘Tamar Braxton’.
*Visit her official website: www.erykah-badu.com
*Follow her on Twitter, YouTube, Facebook and Instagram.