Yvonne Strahovski is an Australian actress born in Werrington Downs, New South Wales. She is best known for playing the role of CIA Agent Sarah Walker in the television series Chuck from 2007 to 2012, for which she won multiple TV Guide Awards. She can also be recognized for her roles in the Showtime series Dexter and 24: Live Another Day. She is also notable for her roles as Anne Frazier in Killer Elite and Terra Wade in I, Frankenstein. Born Yvonne Jaqueline Strzechowski on July 30, 1982 in Werrington Downs, New South Wales, to Bozena and Peter Strzechowski, her mother is a lab technician and her father is an electronic engineer. She belongs to Polish descent speaks Polish fluently. She attended the Santa Sabina College for her high school education, and graduated from University of Western Sydney’s Theatre Nepean in 2003. In 2017, she married her boyfriend of more than 6 years Tim Loden in Northern California. 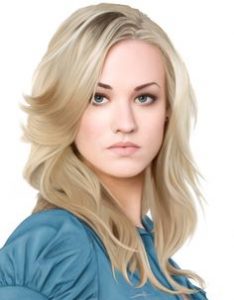 Yvonne Strahovski Facts:
*She is of Polish descent speaks Polish fluently.
*Her parents were born in Poland but moved to Australia.
*She can play Viola.
*She was named on number 24 on Wizard magazine’s Sexiest Women of TV list in 2008.
*She was named the 50th sexiest woman in the world in 2011 by FHM (Australia).
*She supports PETA and appeared in an ad for their “Adopt, Don’t Buy” campaign.
*She beat Beau Garrett, Karolina Kurkova and Nicole Richie in Chuck (2007).
*She has two dogs, Chazzie and Willy.
*Follow her on Twitter, Facebook and Instagram.