EST Gee is an American rapper and songwriter who was featured on Lil Baby’s 2021 single “Real as It Gets” which became his first Billboard Hot 100 song, peaking at number 34. EST Gee’s fifth mixtape, Bigger Than Life or Death, released on July 21, 2021, and peaked at number 7 on the Billboard 200.

Born George Albert Stone III on May 11, 1994 in Louisville, Kentucky, to parents George and Sheila Stone, EST Gee grew up at Tubman Court & Ellington Avenue in the southeastern region of the city. He graduated from St. Xavier High School in 2012, and won a scholarship to play college football for Indiana State University and majored in communications. 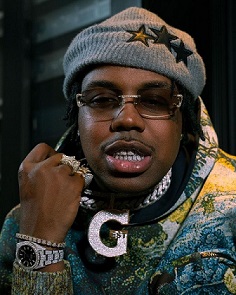 In March 2020, his mother died due to leukemia and his brother passed a week later in a shooting in Louisville. Gee was shot five times in September 2019 following a music video shoot, getting hit in the stomach four times and once on his left eye. His brother was hit in the leg. They were transported to a hospital and Gee was discharged after two weeks. Following surgery, Gee has retained most vision in his eye.