Eva Padberg is a German fashion model, singer, songwriter and actress who become the face of the makeup brand Astor in 2003. In May 2005, Padberg appeared in the TV commercial of the candy brand “Gletscher Eis” and in September of the same year she became not only the new face of the Korean automobile manufacturer Kia Motors, but also the new cover top-model of the mail order company Otto and campaign model for Nintendo’s Nintendogs. She was photographed for the German Playboy by Ellen von Unwerth in May 2004, and became cover model of the magazine GQ in 2006. Together with her husband Niklas Worgt, Padberg was part of a electronic club act called Dapayk & Padberg. Also an actress, Padberg had minor roles in her debut Maria an Callas and the film adaptation of the video game In the Name of the King: A Dungeon Siege Tale. She also worked in the jury of Germany’s Star Search and, in 2006, as a presenter for the Bambi award of Hubert Burda Media together with talk show host Harald Schmidt. 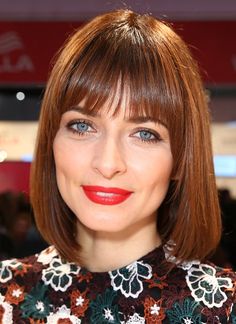 Born on January 27, 1980 in Bad Frankenhausen, Germany, she grew up in Rottleben, Germany. After being in a relationship for ten years, Padberg married the music producer Niklas Worgt on July 29, 2006. They have a daughter together.

Eva Padberg Facts:
*She was born on January 27, 1980 in Bad Frankenhausen, Germany.
*She was among the ten best models as part of Bravo’s Boy & Girl contest in 1995.
*She was voted “Sexiest Woman of the World” by the readers of FHM in 2005.
*She has served as an ambassador for UNICEF.
*Since May 2007, she has represented Mercedes-Benz as a brand ambassador at international fashion and lifestyle events, including Mercedes-Benz Fashion Week Berlin and Mercedes-Benz Fashion Week Mexico.
*Visit her official website: www.evapadberg.de
*Follow her on Twitter, Facebook and Instagram.