Fahriye Evcen is a Turkish actress and model born in Solingen, Germany. Fahriye is most famous for her portrayal of Necla Tekin on the Turkish drama series Yaprak Dokumu. She is also known for her role as Feride in the TV series Calikusu. She played Young Signora Enrica in the 2011 comedy-drama film Signora Enrica. She made her acting debut as Pınar in the Turkish sitcom, Asla Unutma (2005). Her accolades include two YTÜ Yılın Yıldızları Awards, one MGD 19. Altın Objektif Award, one Siyaset Dergisi Award, one Elle Style Award, one Golden Sebilj Award, one AYD Award, one Türkiye Gençlik Award, and one Istanbul Üniversitesi 1453 Award. Fahriye was born on June 4, 1986 in Solingen, North Rhine-Westphalia, Germany. She is of Turkish descent on her father’s side, and of Circassian descent on her mother’s side. She has three sisters Aysen, Demet and Nese. At age 19, she moved to Turkey, and completed a degree in history at Bogazici University, Istanbul. She has been married to Turkish Actor Burak Özçivit since June 29, 2017. 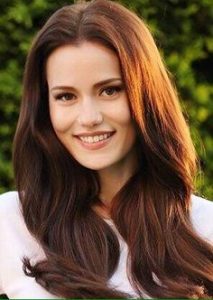 Fahriye Evcen Facts:
*She moved from Germany to Turkey at age 19.
*She is fluent in Turkish, English, German and Spanish.
*She was introduced to producer Ibrahim Mertoğlu by actress Oya Aydoğan, while Fahriye was on holidays in Turkey.
*She got engaged to Burak Özcivit on December 23, 2016.
*Follow her on Twitter and Instagram.