Arden Myrin is an American actress and comedian, known for her performance in the television show MADtv, where she appeared on the final four seasons. Her other notable television credits include Psych, Bones, Fresh Off The Boat, Suburgatory, 2 Broke Girls, Reno 911!, Orange Is the New Black, Hung, Key & Peele, and Inside Amy Schumer. Her movie credits include Christmas with the Kranks, In & Out, What Women Want, Evan Almighty, and Auto Focus. Arden was born to Janet and Folke A. Wilhelm Myrin, on December 10, 1973 in Little Compton, Rhode Island, USA. She belongs to Swedish and Norwegian descent. She has an older brother, Alarik Myrin. She has been married to Dan Martin since December 30, 2007. 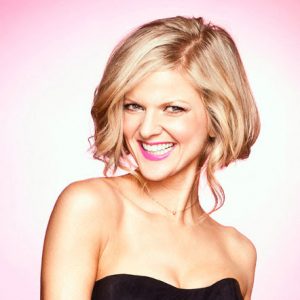 Arden Myrin Facts:
*She is of Swedish and Norwegian descent.
*Her father, Folke A. Wilhelm Myrin, was an accountant, while her mother, Janet, was a real estate agent.
*She was elected commencement speaker at her graduation.
*Follow her on Twitter, Facebook and Instagram.