Faye Tozer is a British singer-songwriter, dancer and stage actress. She is best known as being one of the three female singers of pop group Steps who came together in 1997 and had 14 top 5 singles in the UK, split up on Boxing Day 2001 before reforming in May 2011. Born Faye Louise Tozer on November 14, 1975 in Northampton, England, she has an older sister named Clare. She joined her first dance class at the age of six. She made her professional musical-theatre debut in 2004 in a national tour of Andrew Lloyd Webber’s one-woman musical Tell Me on a Sunday. She has been married to Michael Smith since December 5, 2009. Together they have one son, Benjamin Barrington Tozer-Smith. She was previously married to Jasper Irn. 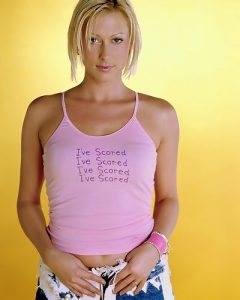 Faye Tozer Facts:
*Born in Northampton, England on November 14, 1975, she was raised in Dunstable, Bedfordshire.
*She first joined Steps in 2007.
*In 2004, she appeared in Andrew Lloyd Webber’s musical, Tell Me on a Sunday.
*She is a fan of rock music, especially System of a Down.
*She is a patron of Josie’s Dragonfly Trust.
*Visit her official website: www.faye-tozer.com
*Follow her on Twitter and Instagram.