Felicity Huffman is an American actress of film, stage, and television. She is best known for her portrayal of Lynette Scavo on the ABC TV series Desperate Housewives, for which she won a 2005 Primetime Emmy Award for Outstanding Lead Actress. From 1998 to 2000, she starred as Dana Whitaker in the ABC comedy-drama Sports Night, for which she earned a Golden Globe Award nomination. For her performance as a transgender woman in the 2005 independent film Transamerica, she earned a Golden Globe Award, Independent Spirit Award, National Board of Review, and an Academy Award nomination for Best Actress. From 2015 to 2017, Huffman starred in a third ABC series, the anthology crime drama American Crime, for which she received three Primetime Emmy Award nominations, two Golden Globe nominations and a Screen Actors Guild nomination. Born Felicity Kendall Huffman on December 9, 1962 in Bedford, New York, to parents Moore Peters and Grace Valle Huffman, she grew up in Aspen, Colorado. She attended The Putney School, and graduated from the prestigious Interlochen Arts Academy in Interlochen, Michigan, where she majored in theater (1981). She began her acting career in theatre and in 1990s also had many supporting roles in film and television. She married William H. Macy in 1997. They have two daughters, Sophia Grace and Georgia Grace. 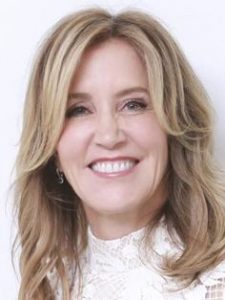 Felicity Huffman Facts:
*She was born on December 9, 1962 in Bedford, New York, USA.
*Her ancestry includes German, English, Scots-Irish, Scottish, French-Canadian, and Irish.
*Her parents divorced when she was one year old.
*One of her idols is Tina Turner.
*She likes herbal tea.
*She is best friends with Patricia Wolff.
*Follow her on Twitter, YouTube, Facebook and Instagram.