Frankie Bridge is a British singer and songwriter, best known as a member of the British-Irish girl group The Saturdays. The other members of the group are Vanessa White, Mollie King, Una Healy and Rochelle Wiseman. The Saturdays released their debut album, Chasing Lights, in 2008 and charted at #9 on the UK Albums Chart. From 2001 to 2005, Bridge was a member of S Club Juniors. In 2014, Bridge participated in the Twelfth season of Strictly Come Dancing where she was the runner-up of the series. Born Francesca Sandford on January 14, 1989 in Upminster, United Kingdom, to parents Viv and Kevin Sandford, she has one older sister named Victoria. Before appearing on the S Club Search competitive television show, Bridge worked as a sales assistant. Since July 19, 2014, she has been married to soccer player Wayne Bridge with whom she has two children. [© celebsfacts.com] She was previously in a relationship with Dougie Poynter from 2008 to 2010. 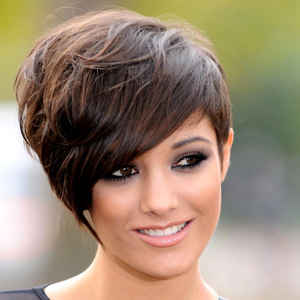 Frankie Bridge Facts:
*She was born on January 14, 1989 in Upminster, United Kingdom.
*She started taking dance lessons from the age of three at her local Community centre.
*She used to be a cheerleader on SMTV.
*She is a member of the British-Irish girl group The Saturdays, along with Mollie King, Una Healy, Rochelle Humes, and Vanessa White.
*She became runner-up in the Twelfth series of Strictly Come Dancing in 2014.
*She has a tattoo of a star on her wrist and another on her back under her neck which says “Sunshine ‘n’ Showers”.
*Visit her official website: www.frankiebridge.com
*Follow her on Twitter, Facebook and Instagram.