French Stewart is an American actor. He is best known for his roles as Harry Solomon in the 1990s sitcom 3rd Rock from the Sun, and as Chef Rudy in the sitcom Mom. His film credits include Leaving Las Vegas, The Poison Tasters, Magic Island, Glory Daze, McHale’s Navy, Love Stinks, Clockstoppers, Earl Doppler and Wedding Daze. He has also done voice work in the short-lived animated series God, the Devil and Bob, and Disney’s animated series Hercules. Born Milton French Stewart on February 20, 1964 in Albuquerque, New Mexico, USA, his mother was a homemaker, and his step-father was a microfilm technician. He attended Del Norte High School and graduated from American Academy of Dramatic Arts with a B.F.A. in Theatre Arts. His first role was in the 1994 film Stargate. He has been married to Vanessa Stewart since June 11, 2011. Together they have one daughter, Helene Claire Stewart. He was previously married to Katherine LaNasa. 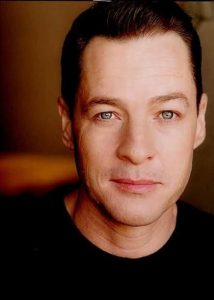 French Stewart Facts:
*He was born on February 20, 1964 in Albuquerque, New Mexico, USA.
*He attended West Texas State University in Canyon, Texas for two semesters (1982-1983).
*The only actor to appear in both Stargate and SGU Stargate Universe.
*He has a collection of silent films.
*Follow him on Twitter and Facebook.