Sadie Calvano is an American actress. She is best known for her portrayal of Violet Plunkett on the CBS sitcom Mom. She portrayed the titular role in the 2016 television film The Perfect Daughter. She is also the official spokesperson for Bags4kids, an organization that provides comfort items and support for distressed foster children. Born Sadie Amara Calvano on April 8, 1997 in Los Angeles, California, USA, to parents Aimmee and Steven Calvano, she was a competitive gymnast before focusing on acting full-time after fourth grade. She first gained attention with her childhood role in the 2011 Clint Eastwood-directed film J. Edgar. In 2016, Sadie began dating producer and photographer Alex Brisker. 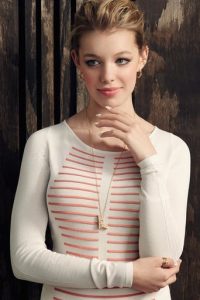 Sadie Calvano Facts:
*She was born on April 8, 1997 in Los Angeles, California, USA.
*She began acting in theatrical productions at age 7.
*She began portraying in the sitcom Mom in 2013.
*She has a cat named Piper, and a dog named Benji.
*Visit her official website: www.sadiecalvano.com
*Follow her on Twitter, Facebook and Instagram.