Gary is a South Korean rapper, record producer, songwriter, entrepreneur and television personality, best known as a member of the South Korean hip hop duo Leessang whose last three albums broke numerous records and guided their entry to the mainstream Korean music industry. Gary made his debut as a solo artist with the mini-album Mr.Gae in January 2014. Mr.Gae’s song “Shower Later” clenched the number 1 spot on 8 real-time music charts. He has also been featured in works by famous artists such as Psy, Youngjun, San E, Jung-in, Kim Bum-soo, Baek Ji-young, Kim Jong-kook, Eun Jiwon, MC Mong, Lee Hyori, and Dynamic Duo. Born Kang Hee-gun on February 24, 1978 in Seoul, South Korea, he attended Yong In University. He is married and has a son. 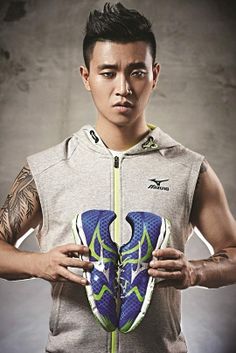 Gary Facts:
*He was born on February 24, 1978 in Seoul, South Korea.
*His real name is Kang Hee-gun.
*He was an amateur boxer for ten years.
*He was a member of the former hip hop duo Leessang.
*He released a mini album, Mr.Gae in January 2014.
*Follow him on Twitter and YouTube.