Television personality who became recognized for her friendship with Oprah Winfrey. She is the co-anchor of CBS This Morning and an editor for O, The Oprah Magazine. Gayle was born on December 28, 1954 in Chevy Chase, Maryland, U.S. to Peggy and Scott King. Her mother was a housewife and her father was an electrical engineer. She spent most of her growing years in Turkey. She attended the University of Maryland and earned degrees in sociology and psychology in 1976. She married William Bumpus in 1982, and the couple had two children before getting divorced in 1993. 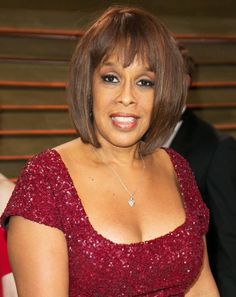 Gayle King Facts:
*She has two college degrees, one in sociology and one in psychology.
*She is best friends with Oprah Winfrey.
*She joined O, The Oprah Magazine as an editor in 1999.
*She often jokes about her size-10 feet, that are the same size as those of her best friend, Oprah Winfrey.
*She was married to William Bumpus from 1982 until 1993.
*Follow her on Twitter, Google+ and Instagram.