Geena Davis is an American actress, who won an Academy Award for Best Supporting Actress for her role in the 1988 drama The Accidental Tourist. For her performance in Commander in Chief, she won the Golden Globe Award for Best Actress – Television Series Drama in 2015, and was nominated for a Golden Globe Award for her role in A League of Their Own. Her other notable roles include The Fly, Beetlejuice, The Long Kiss Goodnight, and Stuart Little. Born Virginia Elizabeth Davis on January 21, 1956, in Wareham, Massachusetts, to Lucille and William Davis, she has an older brother, Dan Davis. Following her high school graduation, she attended and graduated from Boston University in 1979 with a bachelor’s degree in drama. She worked as a model before she began a career in film. She made her film debut in the 1982 film Tootsie. She married neurosurgeon Reza Jarrahy in 2001. After having two sons named Kian and Kaiis and a daughter named Alizeh, they separated in 2017. She was previously married to Richard Emmolo (1982–83), Jeff Goldblum (1987–90) and Renny Harlin (1993–98). 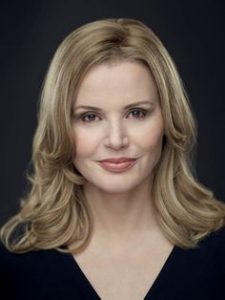 Geena Davis Facts:
*She was born on January 21, 1956 in Wareham, Massachusetts.
*She played flute, piano, and the organ.
*She placed 24th out of 28 semi-finalists for Olympic Archery team.
*She speaks Swedish fluently.
*She is a member of Mensa International.
*In 1995, she was placed at #31 in the list of ‘100 Sexiest Stars in film history’ by Empire magazine.
*She is friends with Susan Sarandon, Nina Tassler, Ingrid Taylor, Meg Ryan and Mimi Rogers.