Sarah Michelle Gellar is an American actress. She is best known for her role as Buffy Summers in the television series Buffy the Vampire Slayer and her appearances in the films Cruel Intentions, The Grudge, and Scooby-Doo film series. For her role in Buffy the Vampire Slayer, she won five Teen Choice Awards, a Saturn Award and a Golden Globe Award nomination. She earned an Emmy Award in 1995 for her work on the soap opera All My Children. Born on April 14, 1977 in New York City, she is the only child of Rosellen, a nursery school teacher, and Arthur Gellar, a garment worker. She is of German Jewish descent on her father’s side, and of Hungarian Jewish descent on her mother’s side. Her parents divorced when she was age seven, and she was raised by her mother on New York’s Upper East Side. She was scouted by an agent at age four. She made her first TV movie, An Invasion of Privacy in 1983. She was a competitive figure skater for three years and was ranked #3 in New York Sate’s regional competition. She attended and graduated from the Professional Children’s School, in 1994 with a 4.0 grade average. She married actor Freddie Prinze Jr. in 2002. They have two children: daughter Charlotte, and son Rocky. 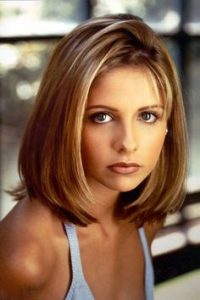 Sarah Michelle Gellar Facts:
*She was born on April 14, 1977 in New York City.
*Her parents are both of Jewish descent.
*She has a black belt in Korean martial art Tae Kwon Do.
*People Magazine named her one of the top 50 Most Beautiful People in the World in 1998.
*She ranked #1 in 1999, #3 in 2000, #64 in 2005, and #94 in 2006 in FHM magazine’s 100 Sexiest Women in the World editions.
*She placed 8th on Google.com’s most searched women in 2002.
*She was named 9th most beautiful person in the world in South Africa’s People magazine in 2002.
*She ranked #16 in 2002, #45 in 2003, and #26 in 2005 in Maxim Magazine’s Hot 100 lists.
*Stockard Channing is her idol.
*Tom Cruise, Daniel Day-Lewis, Angelina Jolie, Uma Thurman, Nicole Kidman, and Sandra Bullock are her favorite actors.
*She has tattoos: Celtic symbol on her left hip, Chinese symbol for integrity on her lower back and a heart with a dagger hanging over it tattooed on the inside of her right ankle.
*She is an avid fan of English football club Arsenal.
*She is allergic to cats.
*Follow her on Twitter, Facebook and Instagram.