George Wendt is an American actor and comedian. He is best known for his role as Norm Peterson on the hit sitcom Cheers, for which he received six consecutive nominations for the Primetime Emmy Award for Outstanding Supporting Actor in a Comedy Series. Wendt hosted his own show, The George Wendt Show, before it was cancelled in April 1995. In 2015, Wendt appeared in the TBS sitcom Clipped, which aired for one season. He has also starred in several films, notably Fletch, Gung Ho, Hostage for a Day, Dreamscape, House, Forever Young, Man of the House, and Lakeboat. Born George Robert Wendt III on October 17, 1948 in Beverly, Chicago, Illinois, to parents Loretta and George Robert Wendt, he belongs to both German and Irish descent. Wendt completed his schooling from Campion High School, Prairie du Chien, Wisconsin and graduated from Rockhurst College (now known as Rockhurst University) in Kansas City, MO. Wendt attended University of Notre Dame in South Bend, Indiana for 2 years. He married Bernadette Birkett in 1978. They have three children together and two step-children. 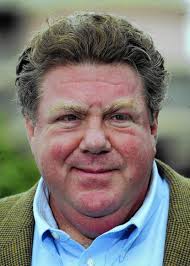 Books: Drinking with George: A Barstool Professional’s Guide to Beer

George Wendt Facts:
*Born on October 17, 1948 in Beverly, Chicago, Illinois, he is of German and Irish descent.
*He is the son of Loretta and George Robert Wendt, an officer in the Navy and a realtor.
*His maternal grandfather was photographer Tom Howard.
*He was expelled from the University of Notre Dame for his 0.00 GPA in his junior year.
*From 1982–1993, he played Norm Peterson in the comedy show Cheers.
*He was featured on Michael Jackson’s music video Black or White.
*He is an avid Notre Dame football fan.