Geraldine Bazan is a Mexican actress, singer, and model born in Mexico City. She is best known for her roles in the television series Dos chicos de cuidado en la ciudad, Catalina y Sebastian, Camila, Sacrificio de Mujer, and Alguien Te Mira. She was born to Rosalba Ortiz Cabrera and Manuel Antonio Bazan, on January 30, 1983 in Mexico City, Distrito Federal, Mexico as Rosalba Geraldine Bazán Ortíz. She spent much of her childhood in Mexico City and later relocated to Miami, Florida. Since February 13, 2016, she has been married to actor and model Gabriel Soto. Together they have two daughters, Elisa Marie and Alexa Miranda. 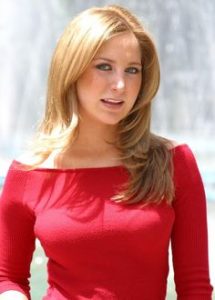 Geraldine Bazan Facts:
*She has been linked to drama age 5.
*Her brother Angel Claude, is also an actor.
*She spent most of her growing years in Mexico City and later relocated to Miami, Florida.
*She speaks Spanish and English fluently.
*Follow her on Twitter, Facebook and Instagram.