Geri Halliwell is an English singer-songwriter and actress best known as one of the members of the pop girl band, Spice Girls, and was known as Ginger Spice. Her solo debut album, Schizophonic, was released in 1998, featuring “Bag It Up” and “Look at Me.” Geri was born to Laurence Francis Halliwell and Ana María, on August 6, 1972 in Watford, Hertfordshire, England as Geraldine Estelle Halliwell Hidalgo. She is of quarter English and Swedish descent on her father’s side, and of half Spanish descent on her mother’s side. She married Formula 1 driver Christian Horner in May 2015. They have a son, Montague George. She was previously in a relationship with Sacha Gervasi with whom she had a daughter named Bluebell Madonna. 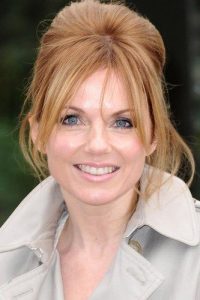 Geri Halliwell Facts:
*Her father was 50 when she was born.
*Before starting her career in music, she was a glamour model and night club dancer.
*She became Goodwill Ambassador for the United Nations.
*She has posed naked for the Playboy and Penthouse magazines photoshoots.
*Follow her on Twitter, Facebook, YouTube and Instagram.

“I have never sung a whole song on my own before and I am not the best dancer in the world, but I would rather try and fall than not not try at all.” – Geri Halliwell