Gisele Bundchen is a Brazilian model and former Victoria’s Secret Angel. One of the highest-paid models in the world, Gisele has appeared on the covers of major magazines, such as Vogue, GQ, Rolling Stone, Harper’s Bazaar, Time, Forbes, Newsweek, W, marie claire, ELLE, and i-D. She ranked #1 on the Forbes top-earning models list in 2012. Born Gisele Caroline Nonnenmacher Bündchen on July 20, 1980 in Horizontina, Rio Grande do Sul, Brazil, to parents Vânia and Valdir Bündchen, she has five sisters: Raquel, Gabriela, Rafaela, Graziela, and Patricia Bundchen. She was scouted by a modeling scout when she was fourteen in a Brazilian fashion mall while on a school trip to Porto Alegre. She began dating American football quarterback Tom Brady in December 2006. They married in an intimate Catholic ceremony in Santa Monica, California on February 26, 2009. Together, they have two children: a son named Benjamin and a daughter named Vivian Lake. 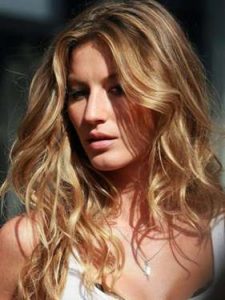 Gisele Bundchen Facts:
*She was born on July 20, 1980 in Horizontina, Rio Grande do Sul, Brazil.
*She is of German-Brazilian heritage.
*Besides her native Portuguese language, she speaks English, Italian, Spanish and some French.
*She wanted to be a professional volleyball player.
*She was discovered in in 1994 at age 14 in a Brazilian fashion mall.
*She moved to New York City in 1997.
*She was named “the best-paid model of all time” by Forbes magazine.
*She has her own line of shoes, called “Ipanema Gisele Bundchen”.
*She is the owner of a hotel in Rio Grande do Sul State, south of Brazil, the Palladium Executive Flat.
*She is the wife of professional football player Tom Brady.
*Visit her official website: www.giselebundchen.com.br
*Follow her on Twitter, Facebook, Google+,  and Instagram.