Actress Goldie Hawn was born Goldie Jeanne Hawn on November 21, 1945 in Washington, District of Columbia, the daughter of Laura and Edward Rutledge Hawn. She belongs to Ashkenazi Jewish, English and German descent. She rose to fame on television’s Rowan & Martin’s Laugh-In (1968–70). She won the Academy Award for Best Supporting Actress and the Golden Globe Award for Best Supporting Actress for the 1969 film, Cactus Flower, maintaining bankable star status for more than three decades thereafter. She is the mother of actors Oliver Hudson, Kate Hudson and Wyatt Russell, and has been in a relationship with actor Kurt Russell since 1983. Hawn is with the height 5 feet 6 inches in tall. She wears a size 5 shoe. Her zodiac sign is Scorpio. 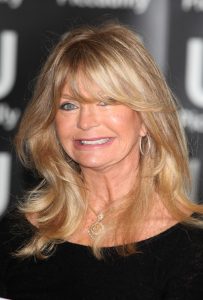 Goldie Hawn Facts:
*She founded The Hawn Foundation in 2003.
*She taught at and ran a ballet school.
*She is an accomplished ballet dancer.
*Is, in fact, a natural blonde.
*At the beginning of her career, she was heralded as the next Marilyn Monroe.