Gretchen Mol is an American actress. She is best known for her role as Gillian Darmody in the HBO series Boardwalk Empire and has appeared in several films, including Rounders, Celebrity, The Thirteenth Floor, The Notorious Bettie Page, 3:10 to Yuma and Manchester by the Sea. Mol’s other notable works include Girls Club, Life on Mars, Mozart in the Jungle, Chance, Nightflyers, and Seven Seconds. Born on November 8, 1972 in Deep River, Connecticut, her mother is an artist and teacher, and her father is a teacher at RHAM High School. She has an older brother named Jim. Mol moved to New York as a teenager to study acting. She attended The American Musical and Dramatic Academy and graduated from the William Esper Studio. She began her acting career in summer stock theatre in Vermont. She has been married to film director Kip Williams since June 1, 2004. They have two children. 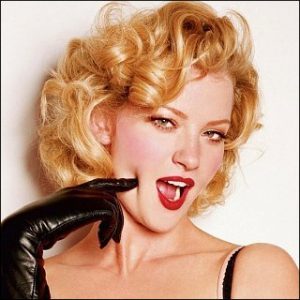 Gretchen Mol Facts:
*She was born on November 8, 1972 in Deep River, Connecticut, USA.
*Her father is a special ed teacher at RHAM High School and her mother is an artist and teacher.
*Her parents divorced when she was young.
*Her older brother, Jim, is an editor and director in the film industry.
*She began her acting career during the mid 1990s.
*She worked as a hat-check girl at a restaurant where her agent-to-be spotted her and got her a Coca-Cola commercial.
*Follow her on Instagram.