Singer and songwriter who first gained attention with her self-released music on social media platforms. Halsey was signed by Astralwerks in 2014 and released her debut EP, Room 93, in 2015. Her debut studio album, Badlands, released in 2015, was certified Double Platinum by the RIAA, as were two of its tracks: “Colors” and “Gasoline”. Her singles “Now or Never” and “Bad at Love” from her second studio album, Hopeless Fountain Kingdom (2017), reached the top twenty of the Billboard Hot 100, with the former peaking in the top five. Halsey’s third studio album, Manic, released in 2020, became her best selling album worldwide, while its lead single, “Without Me”, became her most successful single as a lead artist. 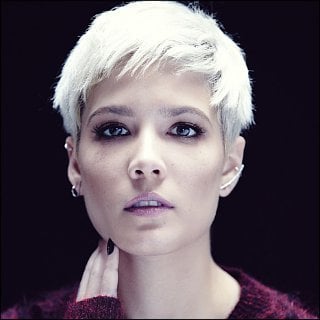 Halsey Facts:
*She was born on September 29, 1994 in Edison, New Jersey, to Nicole and Chris Frangipane.
*She is of African-American on her father’s side and Italian, Hungarian, and Irish descent on her mother’s side.
*She grew up listening to Alanis Morissette, Brand New, and Justin Bieber.
*She started learning to play acoustic guitar at age 14.
*She was diagnosed with bipolar disorder around the age of 16 or 17.
*She has majored in creative writing from a community college.
*She began her singing career in 2012.
*She released her debut studio album, Badlands, on August 28, 2015, via Astralwerks and Capitol Records.
*In 2016, she won a Billboard Women in Music award for Rising Star.
*She was featured on the Chainsmokers’ 2016 single “Closer”, which topped charts in several countries worldwide.
*She was named on Time magazine’s annual list of the 100 most influential people in the world in 2020.
*Tupac, Alanis Morissette, the Cure, Gin Blossoms, Nirvana, Biggie, Bone Thugs-N-Harmony, and Slick Rick are her musical influences.
*17 is her lucky number.
*She launched her own makeup line called about-face in 2021.
*She has a son, Ender Ridley, with her boyfriend Alev Aydin.
*Visit her official website: www.iamhalsey.com