Argentinian professional tennis player who achieved a career-high singles ranking of World No. 8 on 12 October 2020, and a doubles ranking of world No. 39 on 6 January 2020. Turning professional in 2010, Schwartzman has won four ATP singles titles. He reached the Grand Slam semifinal of the 2020 French Open defeating world No. 3 Dominic Thiem, where became the shortest man to reach a Grand Slam singles semifinal since the 5-foot-6-inch (168 cm) Harold Solomon at the 1980 French Open. 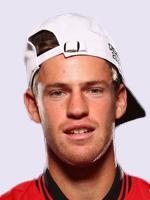 Diego Schwartzman Facts:
*He was born on August 16, 1992 in Buenos Aires, Argentina.
*He started playing tennis from the age of 7.
*He turned professional in 2010.
*He reached his first Masters final at the 2020 Italian Open, defeating defending champion and world No. 2, Rafael Nadal, in straight sets, and Denis Shapovalov along the way.
*He is a clay court specialist, and is noted for his high-quality return game.
*He is a big fan of footballer Lionel Messi.