Hungarian-born American magician and escapologist who was famous for his sensational escape acts. Houdini first gained attention in vaudeville in the US and then as “Harry ‘Handcuff’ Houdini” on a tour of Europe, where he challenged police forces to keep him locked up. He also appeared in several early movies and made many early flights in aeroplanes. Born Erik Weisz on March 24, 1874 in Budapest, Hungary, to Jewish parents Cecelia Weisz Steiner and Mayer Samuel Weisz, he changed his name Erik Weisz to Harry Houdini when he became a professional Magician. He was married to Bess Houdini from 1894 until his death in 1926. 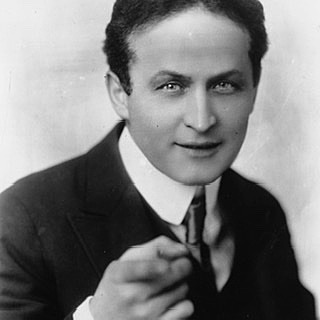 Harry Houdini Facts:
*He was born on March 24, 1874 in Budapest, Hungary.
*He was one of five children born to a Jewish rabbi and his wife.
*His family emigrated from Hungary to Wisconsin when he was just four years old.
*His brother, Theodore, was also a successful magician.
*He was a successful cross-country runner.
*He began his career as a professional magician in 1894.
*He was also an aviation pioneer.
*He co-founded (with Arthur B. Reeve, John Grey and Louis Grossman) Supreme Pictures Corp. (1919-20), a film production company.
*On October 31, 1975, the greatest magician ever was posthumously awarded a Star on the Hollywood Walk of Fame at 7001 Hollywood Boulevard in Hollywood, California.