Hatim Ammor is a Moroccan singer and songwriter, who won the Moroccan music-reality program “Studio 2M” in 2005. He was previously participated in Moroccan Talent Show “Casting Star” on RTM TV Channel and was one of the five winners. Ammor’s best known hits include, Mchiti Fiha, Golili, Nadani Hodnik, Hasdouna, and Viva Morocco. Born on August 29, 1981 in Casablanca, Morocco, he participated in the music-reality program Studio 2M” on 2M Moroccan TV Channel in 2005. He recorded his first single “Wala Marra” in duo with the Lebanese musician Marouane Khoury. He has been married to Hind Tazi since 2009. They have two children. 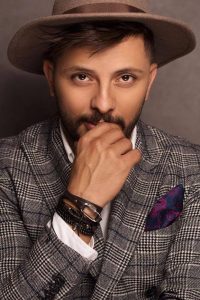 Hatim Ammor Facts:
*He was born in Casablanca, Morocco on August 29, 1981.
*He rose to fame for his victory in the 5th edition of the show Studio 2M.
*He is a fan of Abdelwahab, Abdehadi belkhayat, and Fadl Chakir.
*He is a huge fan of Lionel Messi.
*Follow him on Twitter, YouTube, Facebook and Instagram.