Leyla Hazal Kaya, commonly known as Hazal Kaya, is a Turkish actress and model. She is known for her roles in television, such as Adini Feriha Koydum, Genco, A.Ş.K., and Maral, and in the films İtirazım Var, Kırık Kalpler Bankası and the 2012 Bu Son Olsun. Kaya was born on October 10, 1990 in Gaziantep, Turkey as Hazal Leyla Kaya to lawyers parents. She is married to actor Ali Atay with whom she has a son, Fikret Ali Atay. 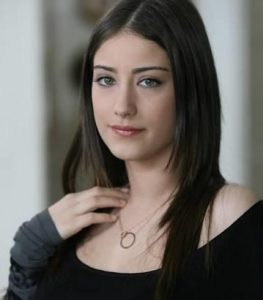 Hazal Kaya Facts:
*Her parents separated when she was seven years old.
*She is fluent in Turkish, English and Italian, and is learning her fourth language, German.
*She is Yildiz Çagri Atiksoy’s best friend.
*She was placed 7th in summitrans’s “Most Beautiful Women In The World” in 2014.
*In 2014, Kaya received US$2 million for Lux International ad.
*Follow her on Twitter, Facebook and Instagram.