Heather Deen Locklear, born September 25, 1961, is an American actress and television personality who became known for her television role as Amanda Woodward on Melrose Place. Her other notable works include Sammy Jo Carrington on Dynasty, Officer Stacy Sheridan on T. J. Hooker, Caitlin Moore on Spin City, science-fiction thriller Firestarter, the action comedy Money Talks, the live-action/animated comedy Looney Tunes: Back in Action, and the romantic comedy The Perfect Man. Locklear was born in California in an upper-middle class family. Her mother was a Disney production executive while her father worked as an UCLA administrator. She belongs to English, Scottish, and German descent. She was previously married to Richie Sambora and Tommy Lee. She has one daughter named Ava Sambora. 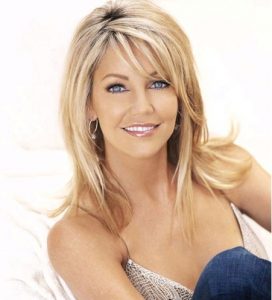 Heather Locklear Facts:
*She has English, Scottish, and German ancestry.
*She is the aunt of actor Shane Ahern.
*She has been named three times on People magazine’s Most Beautiful list.
*She is a Republican.
*Her acting mentors were William Shatner and John Forsythe.
*Connect with Heather on Instagram.