Born Helena Christina Mattsson on March 30, 1984 in Stockholm, Sweden, Helena Mattsson is a Swedish actress. Her notable film credits include ‘Guns, Girls and Gambling’ with Gary Oldman, ‘Seven Psychopaths’ with Colin Farrell, and ‘Iron Man 2’ with Robert Downey Jr. Helena was discovered by one of the biggest modeling agency of Sweden when she was in her early teens. After graduating from her Performing Arts High School in Stockholm, Helena moved to London to continue to study acting. 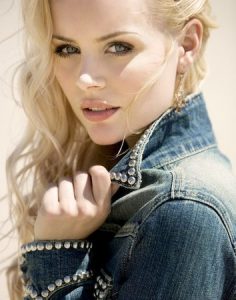 Helena Mattsson Facts:
*She is trained in Martial Arts and is also a trained dancer.
*Helena’s first role was in a short-lived TV series called Sweden, Ohio (2004).
*She was a part of Primal Scream’s music video for song ‘Country Girl’ in 2006.
*Helena was discovered by one of the biggest modeling agency of Sweden when she was in her early teens.
*She has appeared on television in recurring roles for Desperate Housewives and Nikita.
*She keeps in shape by going to the gym a few times a week, with mainly cardio and a few weights.
*Currently, she resides in New York City.
*Follow Helena Mattsson on Twitter.