Hira Tareen is a Pakistani actress, model and VJ. She is known for her roles as Hamna in Mohabat Subh Ka Sitara Hai, Zahra in Goya, Sumbul in Tum Kon Piya, and Kashmala in Khuda Mera Bhi Hai. She has also appeared on several magazine covers including Sunday magazine. She hosted the musical television series Coke Studio Pakistan during it’s 10th season. Born on October 24, 1988, in Pakistan, she belongs to an ethnic Pashtun Tareen family. She had a very prominent modeling career before getting into acting. She has been married to DJ and actor Ali Safina since 2013. Together they have one daughter, Mahgul. 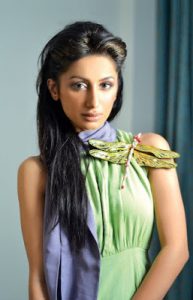 Hira Tareen Facts:
*She was born on October 24, 1988, in Pakistan.
*She began her modeling career in 2001.
*She has her own fashion brand called Icon Clothing.
*She and Ali Safina became engaged on April 25, 2013.
*Follow her on Facebook and Instagram.