Holly Palance is an American actress. She is best known for her role as Young Nanny in the 1976 supernatural horror film The Omen. Palance’s other notable works include “The Comeback” (1978), “The Thorn Birds” (1982-84), and “The Best of Times” (1986). Born Holly Kathleen Palance on August 5, 1950 in Los Angeles, California, USA, she is the daughter of the actor Jack Palance and Virginia Baker. She has two younger siblings, a sister named Brooke, and a brother, Cody. She is a 1968 graduate of Beverly Hills High School. She married Tomorrow Never Dies director Roger Spottiswoode in 1983, and the couple had a daughter named Lily, and a son named Spencer before getting divorced in 1997. 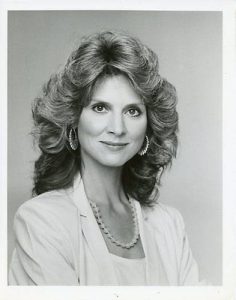 Holly Palance Facts:
*She was born in Los Angeles, California, USA on August 5, 1950.
*She is the daughter of Academy Award-winning American actor Jack Palance.
*She attended and graduated from Beverly Hills High School in 1968.
*She co-hosted Ripley’s Believe It or Not! with her father for one season.