Holly Willoughby is a British television presenter, model and brand ambassador, best known for her television work with ITV and BBC One. Currently, Willoughby is the co-host of This Morning and Dancing on Ice alongside Phillip Schofield. She hosted the revived television series Surprise Surprise from 2012 to 2015. Other TV work includes The Voice UK, The Xtra Factor, Play to the Whistle, and Celebrity Juice. In 2010, she received the National Television Award nomination for Most Popular Entertainment Presenter. Born Holly Marie Willoughby on February 10, 1981 in Brighton, East Sussex, England, to parents Linda and Brian R. Willoughby, she has one older sister named Kelly. Holly attended Burgess Hill School for Girls in Burgess Hill in West Sussex, and studied psychology at The College of Richard Collyer in Horsham. She was discovered at the age of 14, by Storm Modelling Agency while on a school trip. She has been married to Dan Baldwin since August 4, 2007. They have three children: Harry, Belle, and Chester. 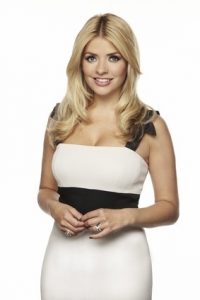 Holly Willoughby Facts:
*She was born on February 10, 1981 in Brighton, East Sussex, England.
*She began her modeling career after being discovered at age 14.
*Her celebrity hair icon is Kate Middleton.
*She is best friends fellow TV presenter Fearne Cotton.
*She is an enthusiastic supporter of gay rights and homosexual marriage.
*She is a brand ambassador for Diet Coke in the UK, as well as for Marks & Spencer and Garnier.
*Visit her official website: www.officialhollywilloughby.com
*Follow her on Twitter, Facebook, YouTube and Instagram.