Indira Weis is a German singer and actress, who achieved fame as a member of the R&B/Pop group Bro’Sis. She left Bro’Sis in May 2003. She is currently working on a solo career. As an actress, Weis appeared in Helloh, Miss Lucifer!, Snowblind, SOKO Kitzbühel, Der Kriminalist and Das Traumhotel. In 2011, she became a competitor of the fifth season of Ich bin ein Star – Holt mich hier raus!. Born Verena Weis on September 30, 1979 in Groß-Gerau, Germany, to parents Manju and Helmut Weis, she has an older sister. She is of German descent on her father’s side, and of Indian descent on her mother’s side. She earned her nickname “Indira” on a family trip to India as a child. She was in a relationship with rapper Manny Marc from 2011 to 2014. 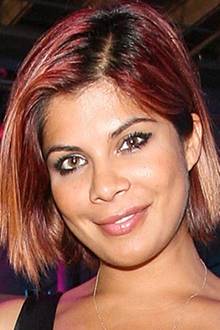 Indira Weis Facts:
*She was born on September 30, 1979 in Groß-Gerau, Germany.
*Her father is German and her mother is from India.
*Her maternal grandparents live in India.
*She started taking guitar lessons at age five.
*She started school at age five, unlike most children in Germany, who usually start at six or seven.
*Became known as a member of the POP/R&B group Bro’Sis.
*She received the New Faces Award as a “Trendsetter of the year” on August 5, 2002.
*She released her debut single, a cover version of the Rudi Carrell single Wann wird’s mal wieder richtig Sommer? in September 2009.
*Visit her official website: www.indiraweis.de
*Follow her on Twitter, Facebook and Instagram.