Welsh actor Ioan Gruffudd who is most famous for his portrayal of Horatio Hornblower in the Emmy Award-winning A&E miniseries. He has played prominent roles in a number of films, including Titanic, Black Hawk Down, King Arthur, Fantastic Four, and Amazing Grace. Gruffudd was born on October 6, 1973 in Cardiff, Wales, UK to educators Gillian and Peter Gruffudd. He has a younger brother, Alun and a younger sister, Siwan. He married actress Alice Evans in 2007. Together they have two daughters, Elsie and Ella. 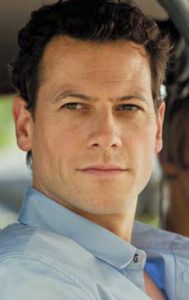 Ioan Gruffudd Education:
Attended and graduated from the Royal Academy of Dramatic Art in London, England in 1995.

Ioan Gruffudd Facts:
*He began his acting career at the age of 13.
*His first language is Welsh.
*He is good friends with the actors Michael Sheen and Matthew Rhys.
*Currently, he resides in Los Angeles, California with his wife Alice and their two daughters.
*Follow him on Twitter.