Issa Rae is an American actress, writer, and producer who first gained attention with her role in the YouTube web series Awkward Black Girl which won a Shorty award for Best Web Show in 2013. Rae created, co-wrote, and starred in the HBO hit series Insecure, for which she has received two Golden Globe Award nominations for Best Actress – Television Series Musical or Comedy and two Primetime Emmy Award nominations for Outstanding Lead Actress in a Comedy Series. Rae released the memoir The Misadventures of Awkward Black Girl in February 2015. She co-starred in the comedy Little and in 2020 starred in the drama The Photograph, the romantic comedy The Lovebirds, and the comedy Coastal Elites. In May 2015, Rae appeared on the cover of Essence magazine’s Game Changers issue, alongside Debbie Allen, Ava DuVernay, Shonda Rhimes, and Mara Brock Akil. Born Jo-Issa Rae Diop on January 12, 1985 in Los Angeles, California, to parents Delyna and Abdoulaye Diop, she has four siblings. Rae graduated from Stanford University in 2007 with a major in African and African-American Studies. She is engaged to her longtime boyfriend, Louis Diame, a Senegalese businessman. 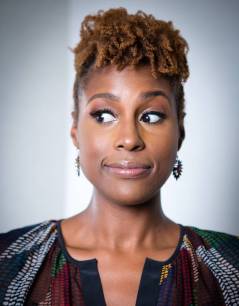 Issa Rae Facts:
*Born on January 12, 1985 in Los Angeles, California, she grew up in Potomac, Maryland, and Los Angeles, California; and spent a short period in Dakar, Senegal.
*She first began writing and acting while in college.
*She created, co-wrote, and starred on HBO’s hit series Insecure alongside Larry Wilmore.
*Glamour Magazine included her in their “35 Under 35” list in 2013.
*She was included on the annual Forbes ’30 Under 30′ list in 2012, 2013 and 2014.
*She was included in Time’s 100 Most Influential People of 2018.
*Visit her official website: www.issarae.com
*Follow him on Twitter, Facebook and Instagram.