British author J. K. Rowling Biography, Family, Career, Height, Weight, Age, Measurements will be discussed here. J. K. Rowling net worth can be checked here. Her novel, “Harry Potter and the Goblet of Fire”, was the top-selling novel of 2000, with 7 million hardcovers sold.

J. K. Rowling is an English novelist, philanthropist, screenwriter, and film producer, best known as the creator of the ‘Harry Potter’ fantasy series, one of the most popular book and film franchises in history. Her first novel in the series, Harry Potter and the Philosopher’s Stone, was followed by six equally popular installments, all of which were made into feature films.

Born as Joanne Rowling on July 31, 1965 in Yate, Gloucestershire, England, to Anne Volant Rowling and engineer Peter James Rowling, she grew up in Tutshill, Gloucestershire, and went to school at Wyedean Comprehensive. She graduated from Exeter University. As she had no middle name, she chose K as the second initial of her pen name, incorporating her paternal grandmother’s name, Kathleen, for the latter initial. Rowling started writing as a child, creating stories about a rabbit family for her younger sister’s enjoyment. 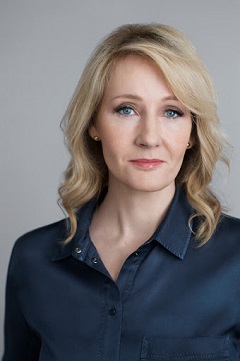 J. K. Rowling Facts:
*She was born on July 31, 1965 in Yate, Gloucestershire, England, UK.
*She earned a degree in French and Classics at the University of Exeter.
*She is a former English teacher.
*She is notable for her seven-book Harry Potter children’s book series.
*’Harry Potter’ fantasy series has sold more than 500 million copies and was adapted into a blockbuster film franchise.
*She became the first author billionaire, according to Forbes magazine (2006).
*She was ranked #9 in the 2008 Forbes The Celebrity 100 list.
*She was ranked the 12th richest woman in the UK in 2008.
*The 2009 Sunday Times List estimated her net worth at $817 million.
*One of her favorite movies is The Fabulous Baker Boys (1989).
*Visit her official website: www.jkrowling.com
*Follow her on Twitter, Facebook and Instagram.