Jack Johnson Biography, Family, Height, Weight, Age, Measurements will be discussed here. Jack Johnson’s personal details can be checked here. Johnson rose to fame as a Vine sensation, accounting for one half of the Vine account Jack & Jack alongside his childhood best friend Jack Gilinsky. 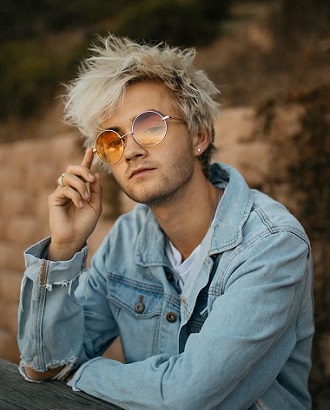 Jack Johnson is an American rapper and musician, best known for being one half of the duo “Jack & Jack” alongside childhood best friend Jack Gilinsky. Their hit 2014 single “Wild Life” reached #87 on the US Billboard Hot 100 Chart. They earned a Teen Choice Award nomination for Most Popular Viner in 2014 and at the 2015 MTV Woodie Awards, they were voted the top Social Climber.

Born Jack Edward Johnson on March 24, 1996 in Omaha, Nebraska, to parents John and Jennifer Johnson, he has an older brother named Jeff. He and Jack met on the first day of kindergarten, both named Jack and wearing the same shirt. They remained friends throughout their elementary and high school years. Their comedy career began in 2007 with the creation of their first collaboration YouTube channel MotherFalconQuagmire.

Jack Johnson Facts:
*He was born on March 24, 1996 in Omaha, Nebraska, USA.
*He rose to fame as one of the Jacks from the famous Vine account Jack & Jack, along with Jack Gilinsky.
*His DigiTour Jack and Jack tour in 2014 was an enormous hit, selling out in 14 of the 18 cities they reached.
*He became a member of a group called MagCon Boys, a group made of popular social media stars.
*Visit Jack & Jack’s official website: www.jackandjackofficial.com
*Follow him on Twitter.