Jacob Whitesides is an American singer and songwriter who is the CEO of Double U Records. He first achieved fame upon uploading cover songs to his YouTube channel as a hobby. Whitesides released his debut extended play (EP), entitled 3 AM, in July 2014. The EP reached #26 on the Billboard 200 and number 2 on the Independent Albums chart. His debut studio album, Why?, peaked at number 25 on the Billboard Independent Charts. 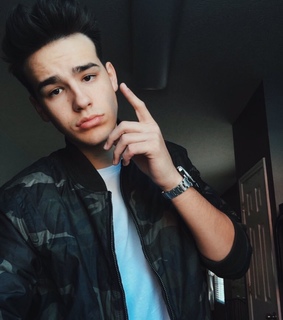 Jacob Whitesides Education:
He attended a public school and then shifted to homeschooling.

Jacob Whitesides Facts:
*He was born on November 11, 1997 in Knoxville, Tennessee, USA.
*He first became interested in music while attending a bluegrass festival in 2008.
*He was voted Knoxville, Tennessee’s Best Young Voice in the junior voice competition in 2011.
*He released his debut EP entitled 3 AM – The EP on July 8, 2014, featuring cover songs of John Legend, Plain White T’s, Sam Smith, Ed Sheeran and John Mayer.
*He plays guitar, drums, ukulele, and electric lead.
*He has been in a relationship with professional Dancer/Choreographer Abby Griffin.
*He previously dated Bea Miller (2015-2016) and Lennon Stella (2017).
*Visit his official website: www.jacobwhitesides.com