Pete Sampras is an American former professional tennis player who is widely considered to be one of the greatest tennis players of all time. He achieved a career-high singles ranking of World No. 1 on April 12, 1993, and a doubles ranking of world No. 27 on February 12, 1990. Turning professional in 1988, Sampras won 14 Grand Slam singles titles during his career, which was an all-time record at the time of his retirement: a then-record seven Wimbledon titles, two Australian Opens and a joint Open Era record five US Open titles. A right-handed player with a single-handed backhand, Sampras won 64 singles titles in total. He first reached world No. 1 in 1993, and held that position for a total of 286 weeks (third all time), including an Open Era record of six consecutive year-end No. 1 rankings from 1993 to 1998. 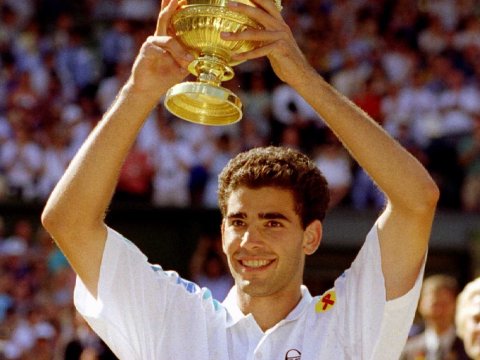 Pete Sampras Facts:
*Born on August 12, 1971 in Potomac, Maryland, his mother is an immigrant from Greece; his father is an American whose father was Greek and mother was Jewish.
*He began his professional career in 1988.
*He won his first Grand Slam singles match at French Open in 1989.
*At the 1990 U.S. Open, he won his first Grand Slam title by beating Agassi in straight sets to become the youngest U.S. Open champion at the age of 19 years and 28 days.
*He became World No.1 for the first time in April 1993.
*He won all Wimbledon titles from 1993-2000 except for the one in 1996 where he lost to in the quarter finals.
*He has won the Wimbledon Championships seven times and has won 14 Grand Slams overall, which was a record until Roger Federer broke it in 2009.
*He was inducted into the International Tennis Hall of Fame in 2007.
*He dated actress Kimberly Williams-Paisley in the late 1990s.
*He married American actress and former Miss Teen USA, Bridgette Wilson in September 2000. They have two children.
*He is a Republican and supported John McCain in 2008.