Jade Pettyjohn is an American film and television actress. She is best known for television roles as McKenna Brooks on An American Girl: McKenna Shoots for the Stars, Summer on the Nickelodeon television series School of Rock as well as Shelby Bell in the 2018 film Destroyer, and Julie Gilbert in the American biographical drama Trial by Fire. Born on November 8, 2000 in Los Angeles, California, USA, her birth name is Jade Elizabeth Pettyjohn. She began performing alongside a local children’s song and dance troupe at age 7, and made her television debut at 8, appearing on a 2008 episode of The Mentalist. 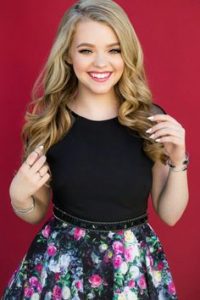 Jade Pettyjohn Facts:
*She was born on November 8, 2000 in Los Angeles, California, USA.
*She acted alongside Nicole Kidman in Karyn Kusama’s Destroyer.
*She knows how to play the guitar.
*Her role model is Cathy Rigby.
*Visit her official website: www.jadepettyjohn.com
*Follow her on Twitter, Facebook and Instagram.