Jaime Murray is a British actress. She is known for her roles as Stacie Monroe in the BBC series Hustle, Lila West in the Showtime series Dexter, Gaia in the Starz miniseries Spartacus: Gods of the Arena, Olivia Charles in The CW series Ringer, Helena G. Wells in the Syfy series Warehouse 13, Stahma Tarr in the Syfy series Defiance, Fiona/the Black Fairy in the ABC series Once Upon a Time, Antoinette in The CW series The Originals, and Nyssa al Ghul in Gotham. Murray voiced Carmilla in Netflix’s animated series Castlevania, an adaptation of Konami’s Gothic horror video game series. Born on July 21, 1976 in Hammersmith, London, England, to Elaine and Billy Murray, she has a sister named Lizzie. Murray briefly studied Philosophy and Psychology at the London School of Economics, but dropped out to train at the Drama Centre London, graduating in 2000. In May 2014, Murray married Bernie Cahill, following a five-month-long engagement. 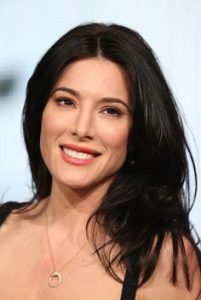 Jaime Murray Facts:
*She was born on July 21, 1976 in Hammersmith, London, England, UK.
*She named after “Jaime Sommers”, the character Lindsay Wagner played in The Bionic Woman (1976).
*She studied acting at the Drama Centre London and graduated in 2000.
*She is good friends with Julie Benz.
*Follow her on Twitter and Instagram.