Jaimee Fourlis is an Australian professional tennis player who achieved a career-high singles ranking of World No. 189 on September 24, 2018, and a doubles ranking of world No. 138 on March 2, 2020. She has won three ITF singles titles and three ITF doubles title. Fourlis made her ITF debut in Glen Iris in March 2014. She made her Grand Slam main-draw debut, after winning the Wildcard Playoff defeating Abbie Myers in the final, granting her a wildcard into the 2017 Australian Open singles tournament. 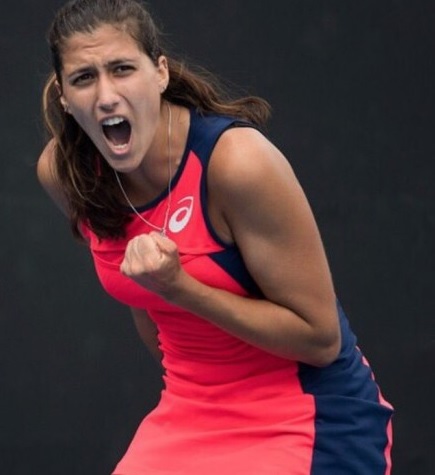 Born on September 17, 1999 in Melbourne, Australia, Fourlis grew up in Melbourne and attended Northcote High School. Her family origins are from Agrinio and Thessaloniki, Greece. Her Greek Orthodox name is Dimitra.

Jaimee Fourlis Facts:
*She was born on September 17, 1999 in Melbourne, Australia.
*She is of Greek descent.
*She plays right-handed and has a two-handed backhand.
*She has a career-high combined ranking of 38 on the ITF Junior Circuit.
*She reached the girls’ doubles semifinals of the 2016 Australian Open, partnering Maddison Inglis.
*She has a career-high doubles ranking of No. 138.
*Follow her on Twitter and Instagram.