James Taylor is an American singer, songwriter and guitarist. He is best known for the hits “Fire and Rain”, “You’ve Got a Friend”, and “Shower the People.” He has won five Grammy Awards. He is one of the best-selling music artists of all time, having sold more than 100 million records worldwide. He was inducted into the Rock and Roll Hall of Fame in 2000 and received a National Medal of the Arts in 2011. Born James Vernon Taylor on March 12, 1948 in Boston, Massachusetts, USA to Gertrude and Isaac M. Taylor, he belongs to English, small amounts of Scottish and Welsh descent. His siblings include musicians Alex Taylor, Kate Taylor, and Livingston Taylor. He has been married to Caroline Smedvig since February 18, 2001. They have two children. He was previously married to Kathryn Walker and Carly Simon. 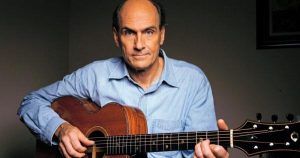 James Taylor Facts:
*He was born Boston, Massachusetts and grew up in Chapel Hill, North Carolina.
*He was only 12 when he started playing guitar.
*He suffered from depression starting his senior year of high school.
*He was voted the 84th Greatest Rock ‘n’ Roll Artist of all time by Rolling Stone.
*He is a staunch Democrat.
*He is longtime friend of legendary cellist Yo-Yo Ma.
*Visit his official website: www.jamestaylor.com
*Follow him on Twitter, YouTube, Facebook and Instagram.